Back on the road Up the Garden Path

By popular demand, Lippy Logic are back on the road again!

Only this time, we're just up the road at Eldroth Church near Settle, close to Lippy Logic Land. Our "Double Dose of Lippy Logic" show was well received at the Grassington Festival Fringe (see reviews below). Now you can see what all the fuss was about yourself on Saturday 28th September.  Tickets £8 (includes glass of wine and famous Eldroth canapes) available from our very good friend Barbara on 015242 51446 or Crossleigh Stores in Austwick 015242 51415. Or contact us at lippylogic@gmail.com

see reviews at:
A Double Dose of Lippy Logic - what the world thought!

MEANWHILE.....What's been occurring in YOUR garden this summer?

Let's have some fun!

In The Yorkshire Country Garden at the moment in Lippy Logic Land, all manner of wierd and dubiously wonderful things are appearing.

Then lurking in Christine's greenhouse (yes the one that features in "A Double Dose of Lippy Logic") is the oddest courgette: 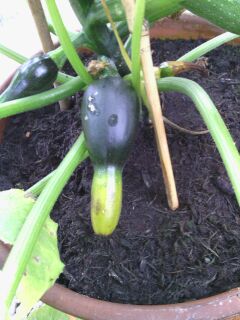 Shall we give it a name? Email your suggestion and even a photo of what's going on in your garden to lippylogic@gmail.com and we'll add them to the blog!

Carry on enjoying this wonderfully hot summer (even the much needed rain!).

See you soon
Christine and Veronica

The show was more than a sell-out (thanks to the box office getting over enthusiastic!)
The audience seemed to like what they saw - and laughed and cried at the right moments...
Booking enquiries: tel: 01729 824537, lippylogic@gmail.com

Thanks to everyone who came along and braved the road closures!

Here are some press reviews and comments from the audience - thanks v much, we really appreciate your comments and support:

My friends and I really enjoyed your ‘Double Dose of Lippy Logic’ last night. What a great achievement for the two of you to engage the audience for such a sustained time. LR 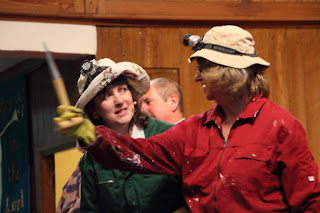 Congratulations on an excellent performance. We enjoyed it immensely. Lippy Logic was so well written and your acting was great. M&GJ

...hugely impressed by the Lippy Logic production at Grassington last night...we did laugh out loud – but for me the real revelation was in the acting and performing of the serious pieces...“Two Friends” and “The Birthday Wish” revealed, both in the acting and the writing, a depth of insight into the human heart that was both perceptive and moving. The reincarnation of Norma Knowsley is a character in the Alan Bennett “Talking Heads” tradition, tortured by mental anguish, frustration and quiet desperation. I do hope we can see more of her. I have some inkling of the hard work and mental tension that goes into such a production. You will have your own ideas for the future but Lippy Logic must return. You two have a great talent which deserves a wider audience somehow. You should,and must,feel very proud of what you have achieved. IS 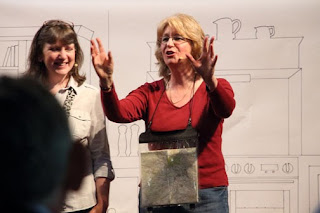 ...You carried it off with huge aplomb and made Austwick very proud...The Birthday Wish was equally as poignant for the second time and we enjoyed it very much... G&SG

Well done to you both – it was an excellent show and the audience did enjoy themselves! PD

Had a really good night on Wednesday. Many thanks indeed. AJ

Congratulations on the performance at Grassington...We thoroughly enjoyed it. You really are two very talented artistes!. G&LP


Just wanted to say how much we enjoyed your fringe show last Wednesday!  What a good way to spend an evening – thank you.  Am now destined to be humming a Yorkshire Country Garden for the rest of the week….. ;). SS

Was so pleased for you that your event went so well with a large and appreciative audience...Good luck with any future concerts. CB (venue)

Congratulations! What a great, entertaining evening. What a double act. Especially liked the way you both ad libbed and handled the audience...Watch out Edinburgh! M&IG 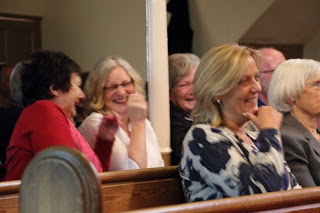 Settle News review:
Intro: funny and cheeky with wonderfully bad puns such as the appearance of the magnificant organ.  Loved the physciality of the humour. Audience responded really well to the use of local references such as the calender girls.  Veronica and Chris got the audience to participate confidently and naturally.
Two friends: A very topical subject  - banker fraud.  The exchanges rang true and drew the audience in as more and more information was revealed.  The duo displayed real dramatic range moving from rueful to anger to incredulity to sadness and sympathy with ease.  Within the drama there was still a few wry and belly laughts - a real feat of writing and playing.  Effective set supported the action without detracting.  PS I want that kitchen.
The garden path:  Laugh out loud funny with more delicious word play e.g. sham jam?  no thank you mam and' trowel and error' .  Lovely costumes and special mention to the slugs and their dramtic demise. The audience participation in the musical interlude was wonderful with the 'naughty children' being firmly put in their place by the adlibbing headmistresses as they played their garden implements - with the exception of the rhubarb triangle - is that a groan I hear?     The decibel level of the shrieks of laughter said it all.
The poems: introduced with music and setting the scene Veronica introduced us to her world through her poems.  Her imagination triggered by the seemingly mundane.  They were a mix of short and sweet, sharply observed and whimsical.  Veronica displayed her vocal dexterity and bought the audience into Lippyworld.  Christine- let her read more!
The Birthday Wish: I've seen this before but was still moved by the writing and the performance.  Poignant and tender: the piece allows us glimpses of a troubled past and painful present in a mother daughter relationship and a woman's struggles in middle age.   Again amidst the sadness, there were laughts and the audience seemed suprised to find themselves laughing literally through their tears.  The set and props really added value and somehow made a chair look lonely.   The audience were visbily touched as it clearly resonated wth many people's experinces.  Wonderful.
...I did notice a few hiccups in delivery which I''m sure you noticed but they did not detract from the overall effect.  I did find it hard to switch back to the funny as the birthday wish is so powerful althugh I did think it was a good idea to leave 'em laughing.
A fabulous debut - on behalf of ladies and gents of a cetain age - more please.  JJ

THANKS EVERSO MUCH EVERYONE - NOW WATCH THIS SPACE!
Christine and Veronica