Please share this with your friends and email contacts. For more information, contact us at lippylogic@gmail.com
Subscribe by email down below to keep abreast of developments as they happen!


We can now exclusively revealed to the world more about the forthcoming Lippy Logic show...there's plenty to make you laugh, cry and, for the more outgoing, join in!

New pieces have been written specially for the show 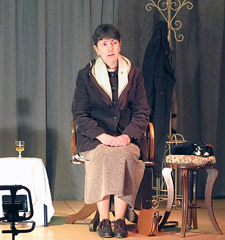 Subscribe below to find out the latest!
Posted by Lippy Logic at 20:30 2 comments:

March was a busy month for the Lippy Logic.

Some of the year we're part of Austwick Community PLayers - from November to the beginning of March. Well, that's when we being actors, In fact we're both heavily involved through the year, one as Treasurer and the other as script writer (er... Playwright if you don't mind - ED)

This year we and our fellow thespians treated the good people of Austwick, Lawkland and surrounds to an extravaganza based on what happened when the Roman Imperial Army reached that corner of North Yorkshire. It was about 122AD (exact chronology is lost in the mists of history) when bulls were oxen, men wore skirts and women wore the trousers. Said Roman Imperial Army had rings run round them by the canny local women as intrigue,enterprise and sleight of hand ruled the roost!

Your heroic Lippy Logic team played 1. a young and naive (surely Christine's most challenging rule to date) welsh girl travelling the north of England in search of her beloved Hefin and 2. Adrian the camp commander (camp by name etc etc...and the Players were short of men...so Veronica made the supreme sacrifice -again). DVD of the show available at a mere £4!

BUT NOW....
all eyes down as Christine and Veronica get ready for the Lippy Logic show at Grassington Festival Fringe on Wednesday evening 26th June at Grassington Chapel. box office 01756 752691 www.grassington-festival.org.uk

We'll tell you more about what we're doing soon, so keep this blog close to hand - subscribe now!
Posted by Lippy Logic at 18:32 No comments: