What a wonderful time we had! Great Audience, Fine Canapés, Super Venue!

If you've never been to Eldroth Church you have missed one of the most serene places in England. Well, maybe it wasn't last Saturday night, when we did our "Double Dose of Lippy Logic" show - "serene" wasn't one of the words we heard from the audience afterwards, to be honest.

But thanks to everyone who sent best wishes for broken legs and all that. Christine is pleased to say she managed not to this time. And the very big thank you to John for doing the sound.

The good people of Eldroth Church did everyone reet proud - canapés that excelled their usual high standard, illuminations fit for an olympic stadium, and an audience that seemed to have enjoyed themselves. We'll leave you with what a couple of people have written about the evening - click here to see reviews - and a few photos below taken by Del from Kent (they travelled from far and wide to see the show!)

We do hope the serenity has returned to Eldroth by now... 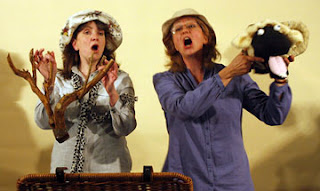